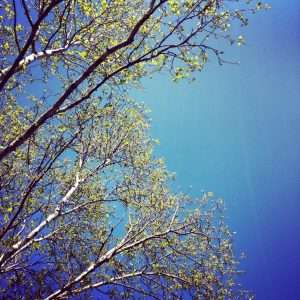 Birkheads means “the birch on top of the hill”

Our little hamlet, hidden in a corner of Gateshead, right on the border with County Durham is called Birkheads – and yes, we are on top of a hill with several silver birch growing around us. Further along Birkheads Lane about half a mile from here, is a small woodland of mature Silver Birch which looks stunning from the road when the evening sun shines through the trees from the west. See if you can spot it next time you are up this way. Locally this area is often called ‘Silverhills’ and there are several references to that name on houses and businesses nearby. So, a big local connection with Silver Birch trees then!

Silver Birch is one of our favourite trees, the white bark slashed with black is so striking and is easy to identify as well as being one of the best trees for bushcraft in the UK– we often collect the bark and fallen twigs around the site for use in our firefighting workshops. Youth Groups who have visited us this year have helped plant 10 new Silver Birch saplings so that we can increase the numbers of this beautiful and resourceful tree for future generations.

To me, the Silver Birch tree represents a teenage girl/woman and I think has some great wisdom to pass on to teenage women – here’s why…